I had the rather excellent fortune to spend last Saturday whale watching in Monterey Bay with two of my favorite human beings. This was somewhat unusual behavior for me, not because I don’t like whales or my friends, but because I’m typically against outdoor activities that a) involve paying money, b) involve strangers, and c) involve travel exclusively via motorized vehicles. Paying a company for a boat ticket to go whale watching with forty other people involves all three of these things, hence I had never been whale watching on the west coast before, though I’ve seen my fair share of those beautiful, humble giants whilst hiking at Pt Reyes and on the Lost Coast and assumed that would probably be as close as I’d ever get. But my friend Luke had suggested going whale watching and was really psyched on going, and I wanted to spend time with my friends and have also been engaged in an intentional attempt to try new things. Aided by a Groupon that brought down the cost of a ticket, I temporarily suspended my (admittedly arbitrary) personal notions about outdoor activities and got on the boat. There were free donuts and the salty air reminded me of my youthful summers spent at the New Jersey shore, which helped a lot. I’m still not sure how I feel about being piled on a boat with a ton of other tourists as we all shuffled from one side of the boat to the other, like a pack of manic lemmings armed with Nikons, our whale watching guide calling out sightings over the loudspeaker. Despite that, the tour was refreshing, surprisingly educational, and all-around way more awesome than I was anticipating. Seeing whales at a distance from atop a shoreline bluff is way different, it turns out, than seeing them from a boat that is able to get pretty darn close. Perhaps more importantly, I learned a bunch of cool stuff about whales and Monterey Bay which I am SUPER PSYCHED to share about (because there is no limit to the topics that I feel nerdy, giddy excitement about).

Did you know: there is a giant freaking canyon under Monterey Bay?!?!

Because I did NOT know that! The Monterey Canyon starts underneath the Pacific Ocean by Moss Landing, CA, and extends westward into the ocean for 95 freaking miles! It is a mile deep! It is comparable to the Grand Canyon in size and shape except it is UNDERWATER. UNDER THE OCEAN. THE GRAND CANYON UNDER THE FREAKING OCEAN. There are not enough all-caps sentences to express how amazing this is to me. Sometimes I forget that the ocean floor isn’t just a flat expanse of nothing, and then I remember, and I am just awestruck. 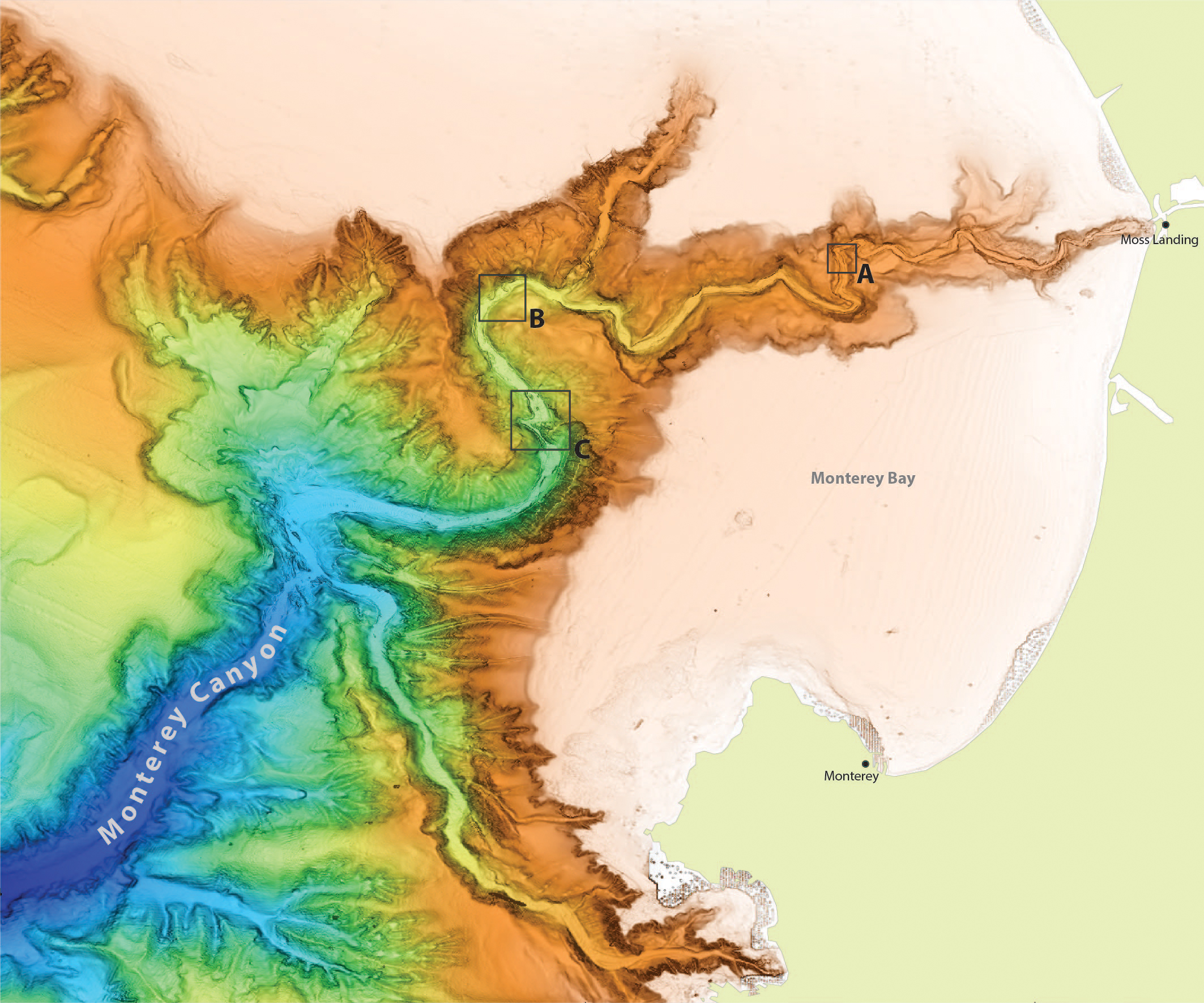 Map of the Monterey Canyon, starting at Moss Landing and extending wayyyyy out into the Pacific Ocean. Map from Monterey Bay Aquarium Research Institute. 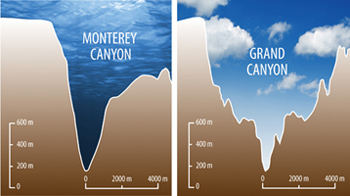 This GIANT FREAKING CANYON is the reason Monterey is a great place to go whale watching - because the canyon is so deep, it’s full of cold water. Cold ocean water has a ton of dissolved nutrients, which translates to lots of food for photosynthesizing plankton, which are the food for krill, which are the food for whales. This deep, cold canyon is therefore a perfect whale feeding ground, and it’s pretty close to shore. Our tour left from Moss Landing, and we only had to motor out for half an hour or so before we started seeing humpback whale after humpback whale. It was pretty cool and beautiful. I, of course, did not succeed in getting any good whale photos, but we did get some good selfies.

It’s technically possible that there is a whale in this picture. 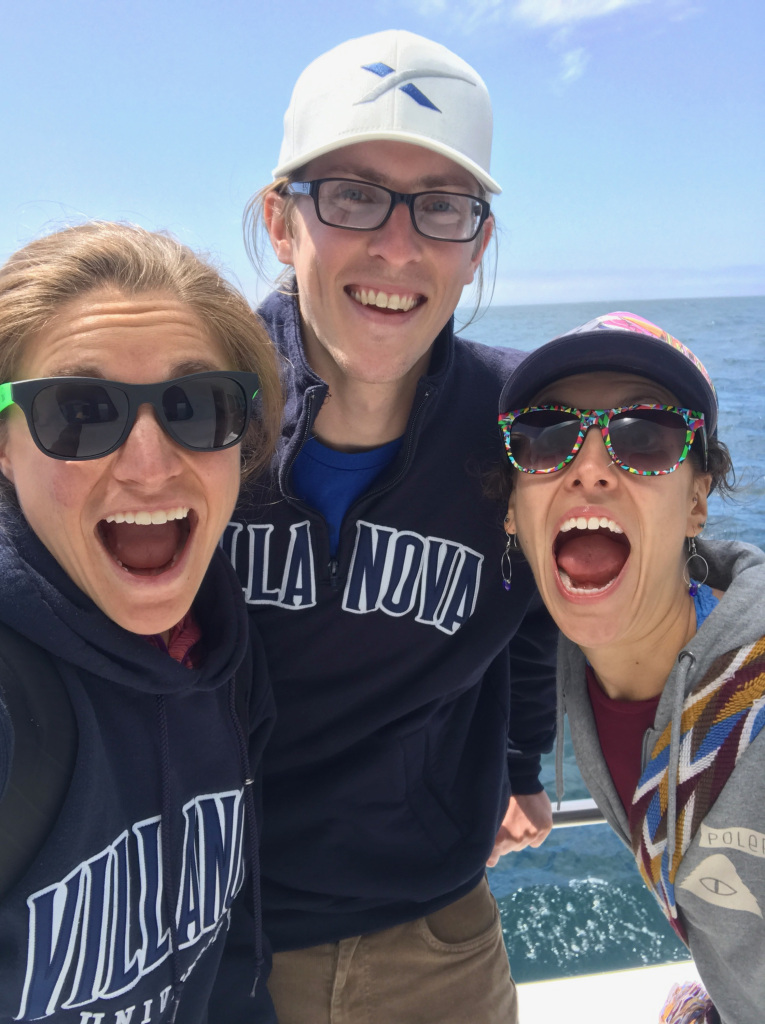 Friends on a boat! I missed the memo that I was supposed to wear my Villanova sweatshirt (go cats!!)

Humpback whales: they are rad

I was equally enthused about the pile of really cool humpback whale facts that our whale watching guide shared with us over the loudspeaker. Learning whale trivia from a tour guide is something I would potentially scoff at in theory, but in reality I got a huge kick out of it. Maybe it’s just the first grader in me, but I LOVE learning trivia about animals, plants, and places (and frankly, everything). Here are some awesome whale facts that I learned:

What seemed initially like a kitschy tourist activity ended up being a really cool day where I learned a lot about an awesome place and some awesome animals. It was a great reminder that the world we live in is really flippin’ cool in many different ways, and it can be valuable for me to break out of my bubble and do things I wouldn’t normally do. Perhaps it’s just because this winter has been so snowy and magical and I haven’t wanted to do anything but ski and seek adventures way above sea level, but I had almost forgotten how fascinating the ocean is and how much wonder exists way below sea level. It was humbling and clarifying to be reminded of the beauty of the ocean and how much we still don’t know about the creatures that inhabit its depths, and the taste of salty air in my mouth didn’t hurt one bit. We also went on a great hike at Pt Lobos State Reserve and saw a ton of harbor seals taking naps on the beach, which capped off the day in a really beautiful way.

Proof that ocean critters have the exact same life priorities as my cat: naps.

In summary, the world is beautiful, the ocean is deep, humpback whales are badasses, and I am grateful for friends who expand my life and are also fun, wonderful people to hang out with. Now excuse me while I go stare at photos of aquatic creatures.