Last summer, I had the awesome opportunity to hike the highest peak in the lower 48: Mt. Whitney, a looming behemoth on the east side of California’s Sierra Nevadas currently standing at 14,508 ft (its elevation is currently gaining due to tectonic uplift!). My friend Emily had impulsively put in for backpacking permits at a time when the trip felt like a distant dream, and in late August we found ourselves loading up our backpacks and heading out of the trailhead at Whitney Portal, elevation 8,000 ft. 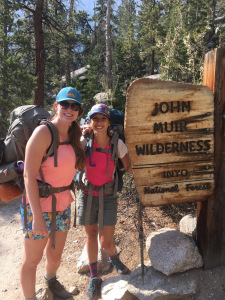 Because we had backpacking permits (the vast majority of Whitney hikers, and man are there a lot, do it as a 21 mile day hike), we had the luxury of taking things slower, and getting to acclimatize to the elevation by hiking just 6 miles in on our fast day and sleeping at Trail Camp, a barren and rocky spot at 12,000 ft (the highest I’ve ever slept at!). Thanks to a good night’s sleep, coffee, and maple oatmeal, we were surprisingly chipper on our second day as we began our ascent up Mt Whitney’s infamous “99 switchbacks” with a slew of other hikers. A quick perusal of Google informs me that the trail does indeed have 99 switchbacks, and a 1700 ft elevation gain. Despite the elevation, we were feeling great and almost danced our way up, much to the chagrin of the day-hikers around us who had been hiking since 4 am. A few hours and many jellybeans later, we were standing at the summit! 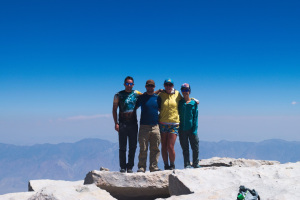 Whole squad at the Whitney summit! I, of course, am the short one.

I had expected more of a struggle. I was almost hoping for more of a struggle, thinking that the feeling of gritting my teeth and dragging myself up no matter what would bring me some form of catharsis. But thanks to a spring and summer spent distracting myself from emotional pain with literally every outdoor sport I knew how to do (and some that I didn’t), I was probably in the best shape of my life on that trail. Both Emily and I were marveling at how good we felt, at how there was never a moment where we thought we wouldn’t be able to make it. We were so ready for pain, altitude sickness, and wind-sucking, but to our surprise we just felt…capable. Forces of nature, indeed.

I’ve been thinking about this trip a lot lately for a few reasons. At the time, it was incredibly emotionally significant. I had been getting over the end of a difficult relationship, had just returned to California after a month of traveling through Brazil and living out of my backpack, was finally about to move out of a house that had become an incredibly stressful place to live, and was headed into the fourth year of my PhD with a clear plan to finish. It had been a hard year, but I made it out, and I was happier and more whole for the struggle. And then there I was at the summit of literally the highest place I could be in California, with some of the people who had supported me so much through my slog of a year. It was as much of a symbolic accomplishment as a physical one. I felt like I was finally ready to approach my life with strength, capability, and a sense of calmness.

Eight months later, as per the ebb and flow of life, I’m in a tough spot again. Attempting to my first scientific paper through peer review (!!!), figuring out how to start writing my PhD dissertation, finishing the fourth year of my PhD, temporarily relocating to Corvallis for a summer internship with the USGS (more !!!!), and navigating the loss of an important friendship, all of these things feel so much harder than it felt to reach the top of Mt. Whitney. All of them! I would happily hike up that mountain five more times if someone else would handle these things for me (frankly, I would happily hike that mountain five more times even if they don’t). I’m hoping that like climbing that mountain, I will eventually move through these things if I just keep drinking enough water, eating jellybeans, dancing with my friends in unlikely places, and finding joy in difficulty. And eventually I’ll stand on top of a high place and look out at the landscape and see all of the places I’ve been, and all of the places I have yet to be, and instead of feeling lost and scared, I’ll feel serene and at home with the smallness of myself and the vastness of the world. I think that life is less about the feeling of accomplishment at reaching a summit, and more about the feeling of standing at that summit with a new perspective on the infinite number of other mountains out there and wanting to climb them too, understanding that the climbing never really ends but each adventure is new and beautiful and part of that beauty is the struggle and difficulty and sometimes pain. 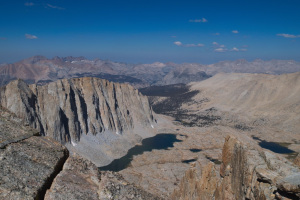 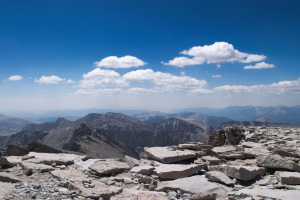 Maybe that was a bit of a heavy-handed metaphor, so I’ll close out with a list of other, more light-hearted things that still feel harder for me than climbing the highest mountain in the contiguous United States:

Cheers to the mountains that we all will climb, literally and figuratively.